In Langabu, the March to Water Ends

As the first of many well drilling expeditions for Aqua-Africa, their time in Langabu has been integral in moving them forward with their mission. 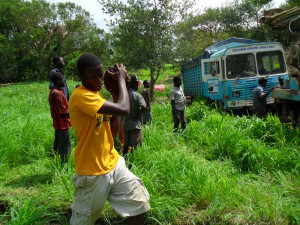 The blades of thick grass poked at his legs. He barely noticed. The sun and its unforgiving heat made his head throb a little. He wasn’t in a hurry, though. He was following the people who do this every day. Sometimes twice. Sometimes thrice. It was a calm, deliberate march.

The march to water.

As Buey Ray Tut saw in his first trip to Langabu, South Sudan, it’s just kind of the way things were around there. The nearest water well was several miles away. He heard the stories about the Italian missionaries that dug it long ago, way back in 1945. It wasn’t the most advanced technology, that’s for sure.

He watched as residents lowered a five-gallon jerry can down into the well with a rope. They tilted it on its side until it was full. They pulled up the hefty can – not an easy feat – and then lowered another. And another. Rinse and repeat. What came up out of the shallow well resembled mud more than water. Locals called it “banana juice.” When asked about the ill effects of the yellow, sediment-tainted water, residents immediately mentioned “stomach worms,” the parasites that everyone seems to have. They just kind of dealt with it, just like they dealt with the reality of spending hundreds of collective hours a week fetching water. Particularly for women, this was an all-day affair. 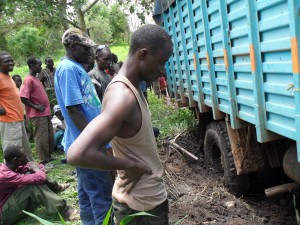 Langabu doesn’t come up on Google maps. No, the Google Earth camera car hasn’t blazed through here yet. But it is like a lot of other villages in East Africa. There are beautiful green pastures. There are baobab trees and livestock. It is a faming town, and residents, now that they don’t have to transport water all day, tend to their crops. One day soon there will be a cell phone tower nearby.

Langabu is also part of the newest nation in the world, South Sudan. With a sense of renewal and a few bucks from the government, village residents opened a school and a clinic in the late 2000s. Aqua-Africa identified Langabu as a village full of potential, a place where people truly want to help themselves. They just needed a little push.

In 2010, Tut and his team arrived in Langabu for the first time. The trip was spent surveying the village and making plans to come back. With funds from the Roberts, McCartney, and Campbell families, along with West Hills Presbyterian Church of Omaha, they were able to return in 2011, this time with their well drilling team. 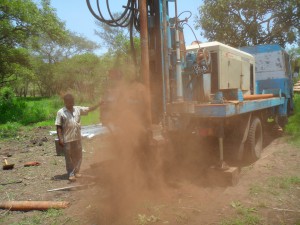 After a trying couple of weeks, including one very un-fun night in jail for allegedly hitting a cow with their vehicle — which they did not — the team was able to drill the first deep water well in Langabu on June 18, 2011. As the clean, clear water ran from it, residents were overjoyed. This was the first time many of them had seen drinking water that wasn’t “banana juice.”

After an hour of deliberation, the well committee – an elected group responsible for maintaining the new well – informed Tut they named the well “Aqua-braska,” in honor of the donors who had made it possible. As Tut explained: “We finished drilling the well, and we capped it. We pumped the water, and gave it to the people. We told them the well was possible because of people in Nebraska. And that meant the world to them.” 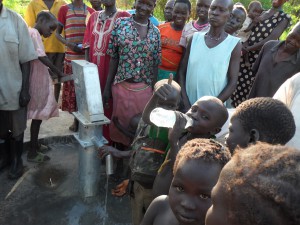 Aqua-Africa went on to drill two more wells in Langabu, which yield a combined total of 24,000 liters of clean water daily.

Special thanks to: Elizabeth Ferrante and Lance Lesroyer for being part of the team on our survey mission; West Hills Presbyterian Church, and the Roberts, McCartney, and Campbell families for making the inaugural well drilling project possible.